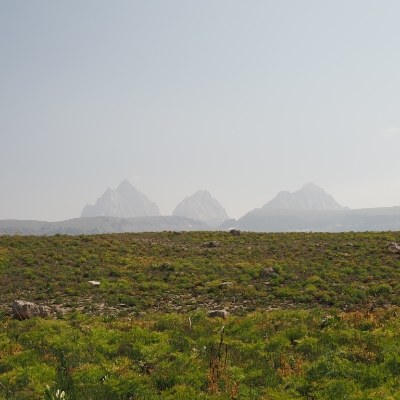 The Teton mountain range of western Wyoming is world-renowned for its unique peaks and unparalleled views. Most people explore the area from the east side in Grand Teton National Park, but the lesser-known west side also holds many incredible meadows, valleys, peaks, and lakes accessible only on foot. I was fortunate enough to have time to explore several of these this past weekend.

As with many of my adventures, this was another last-minute trip. One of my friends, my brother, and I got together Friday night to plan something for the next day. It had been several years since exploring near the Tetons, so that was the area we were looking for hikes in. My dad and younger brother had backpacked into a place called Alaska Basin the year prior, and after looking at several other locations, we decided to do this too but as a long day hike.

We got to the trailhead just after 8 am and started our trek. At this point, we weren't sure whether to go in and out the same way or to add a few extra miles and create a loop. It was about three miles in where the trail split, and after talking with a few other hikers on the trail we decided to do the loop option. This involved climbing up what has been affectionately named the "Devil's Staircase" and after only a few minutes we understood why it had been given that name. It is a mile of steep switchbacks up the side of a cliff and while going up it we weren't sure we had made the right decision, but after reaching the top I at least was happy with our choice. The views looking down into the valley we had climbed out of were spectacular.

Because we had gained most of our elevation at once, it was a mostly flat trek for the rest of the trip until it was time to descend back down. Along the way, we leapfrogged with a few other groups as we stopped for snack breaks and to refill water at the various streams and mountain lakes we passed along the way. There's really not much better than fresh mountain water. We filtered everything to make sure we avoided any bacteria so we had delicious, clean water to stay hydrated with.

The diversity in scenery was incredible. We passed through thick forests, traversed through meadows, and walked across large rock fields. As for wildlife, squirrels and chipmunks scurried all around, and we even saw a few bears on our way back to the trailhead! After almost eight hours and 18 miles on the trail, we finally made it back to the car. Tired and aching, but satisfied with a great expedition, this is definitely an area that I plan to come back to and spend some more time exploring, possibly several days if I have the time. There were many other lakes and peaks nearby just asking to be seen, but sadly I wasn't able to oblige on this trip.