Adventures in the Subway 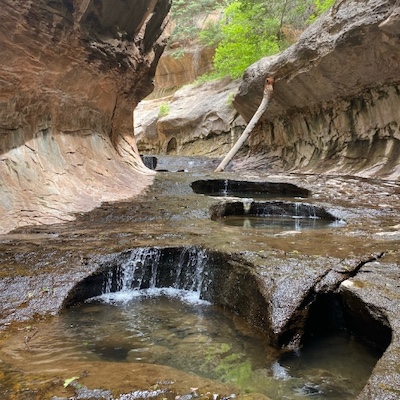 It was 4:45 am Wednesday and I got up to try and view the total lunar eclipse that was allegedly happening. I looked at my phone and saw a text: “If you want you can come, we are leaving at 8 am sharp. Be ready with a pack and waterproof as much as you can.” It was an invite to hike the Subway in Zion National Park and something that I wasn’t going to turn down. I walked outside to catch a glimpse of the moon, but it was covered by clouds. I was sad that I didn’t get to see thhe eclipse, but I was ready to go into the depths of the earth through a canyon.

There were five of us on the trip, we all had the day off at the resort we work for. No one had done this particular canyon before, but everyone was comfortable rappelling and swimming, so we figured that we would be fine. It was about an hour and a half drive to get to the trailhead in the Kolob Terrace section of Zion National Park. On our way down we picked up wetsuits for the water we would be swimming in. We weren’t certain at first if we would need them, but by the end of the trip, everyone was grateful to have them.

I had never been to the Kolob part of Zion before so I wasn’t sure what to expect. After driving through, however, I think that I prefer this section over the main canyon; the views were spectacular and there was no traffic! After parking one car at the end of the trail, we drove up to the trailhead and started the approach. The first mile of this was fairly easy, but then the trail kind of ended so we had to do some exploring in order to find where the trail picked up again. Usually, this worked well enough, but there were a few times that we completely lost the trail and had to do some intense bushwhacking to find our way again. Fortunately, we had a map and compass, but it was certainly exciting!

After our group finally made it down into the canyon, we ate lunch and donned our wetsuits. The first rappel was right off the bat and around 20 feet tall. There were only three places where we needed to descend a rope, and they were all similar heights. Shortly after the first rappel, we hit the first pools of water. These parts were honestly the most fun, there were lots of deep pools that went over our heads which we slid/jumped into and swam through.

After hours of wading, swimming, scrambling, and boulder hopping, we exited the canyon and started the hike to our car. This was by far the most strenuous part of the trip; we hiked poorly built switchbacks for over half a mile up a cliff. Under normal circumstances, this would would have been fine, but after 6 hours of going through the Subway, this was more than a little bit painful. I also hadn’t packed enough water, poor planning on my part, so I finished my last bottle before we even got to the switchbacks. Because of this, as well as because it was my car at the exit, I powered ahead to the top. Unfortunately, as soon as I finished the climb I realized that my keys were in the dry bag with one of my fellow hikers. Luckily there was someone else at the parking lot who allowed me to have some of their water.

We were all exhausted when we regrouped and ready to get back home. It was an incredible adventure, to say the least, and one that I hope to do again. Being at the bottom of a canyon and traveling through a stream bed is a unique experience; it is hard to compare it to anything else.