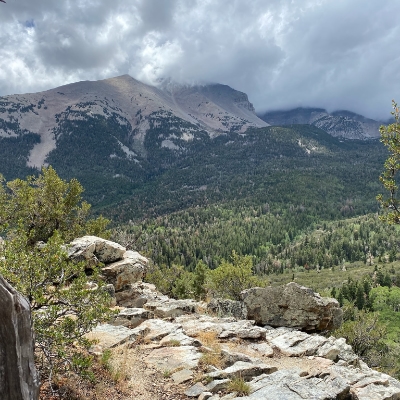 Just to clarify, the title means that I had my birthday in Great Basin National Park and not necessarily that it was a great "basin birthday" because quite frankly I'm not sure what that would mean anyway.

For the past decade, I have only spent one or two birthdays at home with my family. Whether at Scout Camp, on a river, or on the other side of the country as a missionary for my church, August is usually a busy time for me. It's right before school starts so I try to pack in as much as I can. This year was no exception.

Traveling to Great Basin wasn't originally going to happen on my birthday, but after rescheduling a few times this was the last weekend I would be free before the semester started again. And to be honest, I was stoked to be going on another birthday adventure.

There were five of us going, all students at BYU. As the one with the most space in the back of my car, I was the designated driver for the trip (also my car is a manual which apparently is becoming a lost art to drive). I went around Friday morning to pick everyone up and we started on our way. 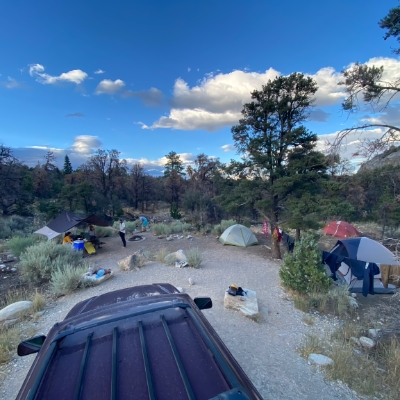 From Provo, it only takes about 3.5 hours to drive to the park so we arrived shortly before noon. As we started driving up towards the visitor we noticed a few things. First, the desert valley very quickly disappeared and morphed into a mountain forest. Second, the mountain we were planning to climb the next day was covered in clouds that we saw coming in our direction. Third, the clouds were full of rain and we got a bit wet. Finally, because it was raining the campground we stayed at was basically empty because we were the only ones brave/crazy enough to stay in tents in that weather.

It was drizzling as we set up camp but fortunately, the rain didn't last very long. We ate lunch before loading in the car again and continuing to drive up the mountain to where we were planning on doing a 6-mile loop to see a couple of alpine lakes, some bristlecone pines, and the remnants of a glacier. 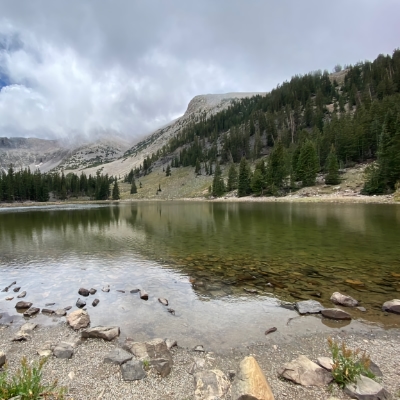 The sky was overcast again when we reached the trailhead but there was no precipitation. We reached the bristlecone pine forest without trouble. A few raindrops fell at this point, but nothing too worrying. I was stoked to finally see a glacier up close, in part because it was questionable how long our climate would continue to preserve them.

Before moving on to the glacier, a quick note about Bristlecone Pines. These trees have an almost otherworldly beauty that I find enthralling. Their longevity is also inspiring with some of them being 5000+ years old! They are not very large trees, but they are incredibly resilient and can survive in very harsh environments. 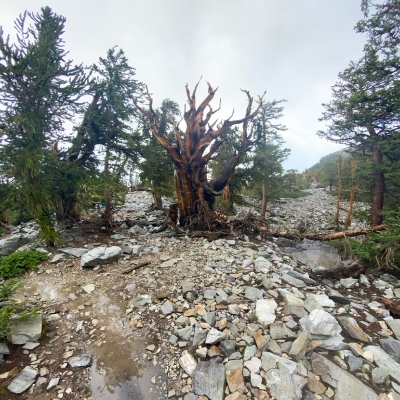 The glacier was not too much further and I'm glad we decided to see it because of how small it was. It was obvious that it was not going to stay around for too much longer.

Here's where I put in my plug to invite your legislators to support bills for positive climate action. In addition, please make a conscious effort to reduce your personal impact on the world around you. Use less plastic, use public transportation where available, and try not to let anything go to waste. 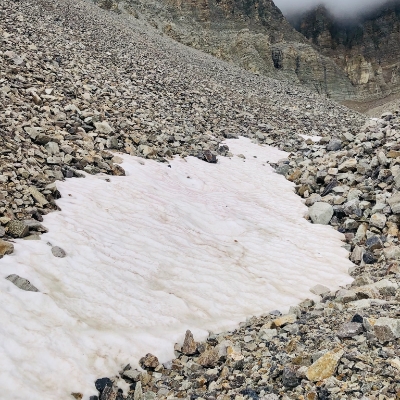 Right as we started hiking away from the glacier mother nature decided to let loose and started dumping rain on us. We tried to move quickly but then hail started pounding our backs and we chose to wait for the weather to clear under the shelter of a bristlecone next to the trail. Eventually, the hail stopped and the rain slowed so we tentatively crawled out from under the tree and started hiking again.

We stopped at two beautiful little alpine lakes, Teresa Lake and Stella Lake, before heading back to the car. Stella lake was the larger of the two and the water was actually fairly warm! (granted, this could have just been because the air temperature was cold so the water only had to be around the same in order to feel warm). 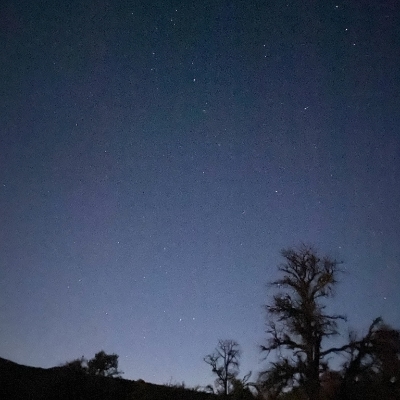 When we returned to our campsite we were amazed that it was completely dry and the sun was shining. This felt phenomenal after hiking for several hours in the rain and hail. We enjoyed some hearty burritos for dinner which were extra tasty after a long day of driving and hiking.

That night there was partial cloud cover but the night sky was still beautiful and bright. There were pockets of stars in between the clouds which shone down.

We awoke to one of the most marvelous sunrises I've seen. There was also a full rainbow that shone brightly in front of the dark clouds that still covered the mountain. The juxtaposition was stunning. 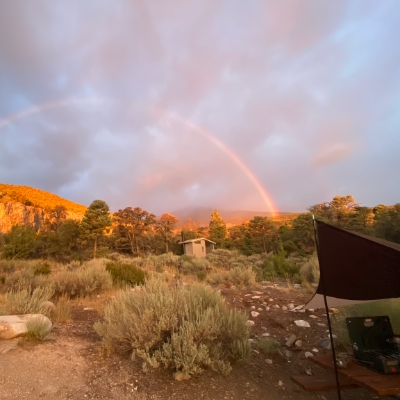 We arrived at the trailhead for Wheeler Peak apprehensive about how the weather would behave. The forecast predicted a slight possibility of thundershowers in the afternoon so we hoped to finish well before then. Visibility was fairly limited for most of the hike, but a few miles in a heavy fog settled and we could only see a few meters in front of us. Past that, everything was white.

Once we got above the tree line, rain started falling down. Then the wind picked up. Fortunately, neither were consistent the whole way up, but we still had to fight to keep moving forward. We met a few other groups who were coming back down and each time we asked if they made it to the top. Each time the answer was a disappointing no. These responses certainly didn't help lift our spirits, but as long as there was no lightning, we were determined to make it to the summit. 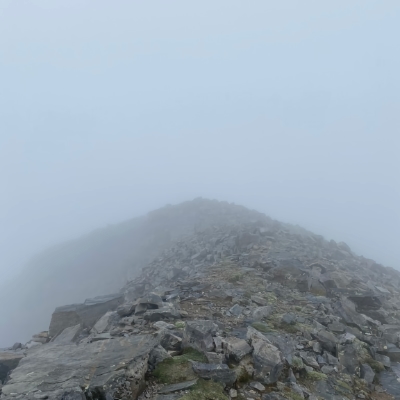 Eventually we made it to the ridge that would eventually take us to the peak. We took a break to catch our breath from the steep trail we had come up (which ended up being less steep that the trail we would shortly embark on). As we pulled out our snacks, I noticed that it was getting brighter. Then all of a sudden we could see down into the valleys on both sides of the ridge! It was spectacular and breathtaking. In my opinion, the view was extra beautiful because it was the first time that day that we had seen anything other than a few trees and rocks next to the trail. The wind and rain had also paused during this time so we could actually feel the warmth of the sun (well, relative warmth, it was still probably only 55 degrees max).

Sadly, that window of light didn't last very long, but the rain didn't bother us for the rest of the hike. There was some wind, but it seemed fairly minimal too. The last stretch before the summit was by far the most difficult. The trail was extra steep, and because we were over 12,500 feet at this point there was significantly less oxygen than we were used to. 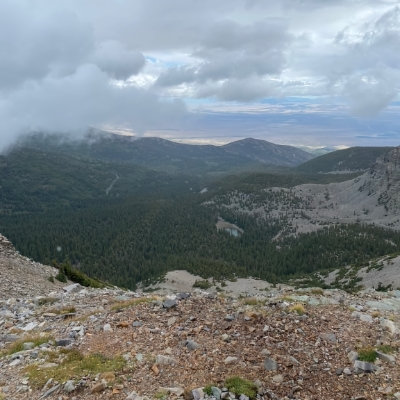 But we pressed forward, albeit slowly, through the fog and up the talus. There were a few sneaky false summits that raised our hopes and then utterly destroyed them after we realized that we weren't actually at the top. When we finally reached the real summit, we almost didn't realize it at first, expecting there to be another climb. But when we finally recognized that we had done it we all yelled out in joy!

There were several wind shelters made out of stacked rocks that we hid in as we ate our lunch. Because of the poor weather we were the only ones on the peak. We had begun the hike around 8:30am and reached the summit around 11:30am, so it took us about 3 hours to climb. 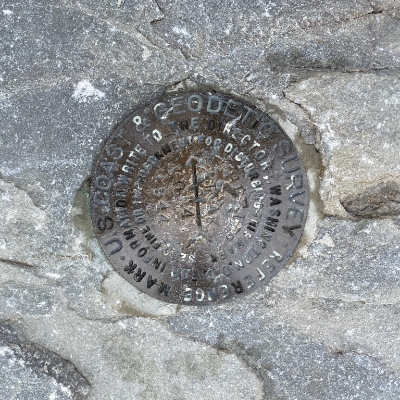 Once we stopped moving, we started to realize how cold it actually was. Because of that we ate quickly, signed the register, and started back down the mountain. When we finally made it back below the tree-line the fog started to lift and we could actually see what the park was supposed to look like!

We made another stop at Stella Lake because it was on the way back to skip some more rocks and just enjoy the view. By the time we made it back to our campsite we were all exhausted. Since we had nothing pressing to do, we all decided to take naps for a bit before making dinner. 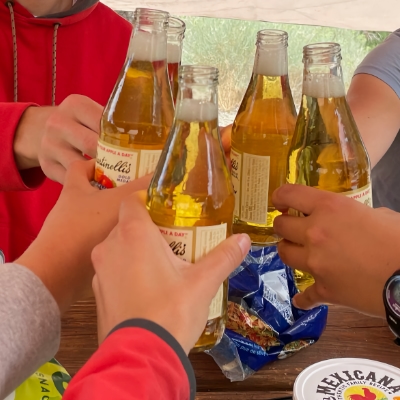 We brought along individual bottles of Martinelli's apple cider to drink with dinner in celebration of my birthday. We had considered bringing them with us on the mountain but decided against it because of the extra weight (and the fact that the bottle could explode because of the substantial increase in air pressure).

Following dinner, we went and explored the area near our campsite. There was a nice stream and some caves nearby. The caves were closed off to preserve pictographs and other artifacts, so unfortunately we weren't able to go into them. Luckily we were able to see some of the paintings from the cave entrance which were really neat!

As we drove back home the next morning, we still had not seen the peak that we had climbed. Right before we lost sight of the park, we looked back and finally saw it: Wheeler Peak peeking out from behind another mountain.