I Camped Inside a Volcano! 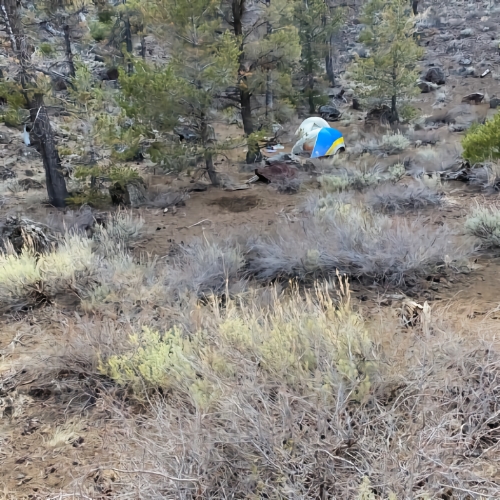 When your coworker asks about your weekend, it is always nice to have something interesting to report. This week, I would claim that I had the most exciting response: “I slept inside a volcano!” I suppose that some clarification must be made, this volcano did not have flowing magma and had not erupted for thousands of years, but it was still impressive. Last weekend my family and I decided to go backpacking in the wilderness area of Crater of the Moon National Monument in southern Idaho. We had all felt the need to get out and do something; the semester was over and the wild was calling.

One of the biggest problems with Idaho is the spring season. The snow has mostly melted at home, but many of my favorite places to travel are still snowed in. This makes it a bit difficult to find a good spot to backpack. But, as I will describe, it is still possible! For those of you who feel the same itch to get outside, hopefully, this post will inspire you to take action and have an adventure!

Our plans for a backpacking trip started back in March. Our original ideas involved driving over to Salmon, Idaho, and backpacking next to the river over there. Things were looking good until the week leading up to our trip. We started keeping a close watch on the weather and noticed that as we got nearer our scheduled date, the forecasted temperature kept dropping and a little snowflake appeared next to the day. We were still determined to go backpacking but decided to come up with a plan B. Last fall my dad, two brothers, and I went and hiked out to an old volcanic crater called Echo Butte in Craters of the Moon. It was a fun hike, and I remembered that you could also camp in that area. We decided to check the weather forecast and found that it was supposed to be sunny and warm! We changed our plans and Friday morning drove to our new destination.

The funny thing about Idaho weather, especially in the spring, is that it likes to change on you without warning. As we pulled into the ranger station it started snowing! Fortunately, it only lasted a few minutes, but it certainly put me on edge for the rest of the day. As we started to hike the sun poked out from behind the clouds and we had a very pleasant time going into camp. As we approached the butte, we realized that there wasn’t a defined trail to get to the center. Undeterred, we moved off the trail and started bushwhacking through sagebrush which conveniently got thicker the closer we got to the crater. Finally, we made it! After checking out different spots that previous backpackers had frequented, we picked a place to set up camp. It was one of the most unique places I’ve stayed and one that I plan on going to again.

After preparing and eating our dinner we went and scrambled up to the rim of the crater and enjoyed an amazing view. The night and morning temperatures were chilly, but we were prepared with layers to keep us warm! As we hiked back to the car we saw storm clouds building right in front of us. Luckily we hopped in the car right as the rain started coming down.

Even though the weather was a bit flaky, it was an awesome trip. If any of you are hesitant about getting outside this spring, just go for it! Be prepared for the unexpected, but also be prepared to have a great time!