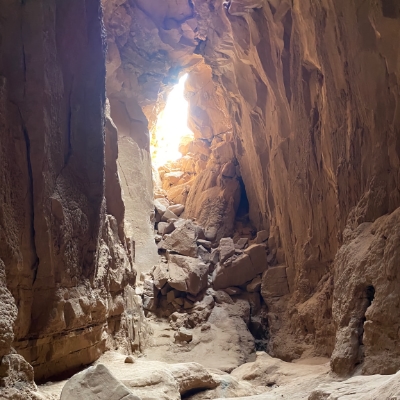 With school being canceled in celebration of Martin Luther King Jr. day I was presented with some extra time to spend. I decided that while doing homework could have been a productive way to spend my time, there were more exciting things that I would rather be doing. So I confronted my brother and after a few minutes of brainstorming we came up with a game plan to have an adventure. We were also able to rope two roommates to join us in our escapade.

Monday at 6:30 am we loaded up in the car after scraping ice from the windshield and rolled out of the parking lot. Our destination was Goblin Valley State Park, a place that I had been as a child but have not visited since. It's about a 3-hour drive so we arrived just before 10 am and were astonished by the alien beauty that confronted us.

I wanted to go rappelling since it had been several months so while looking online I found what seemed like the perfect place, the "Goblin's Lair". It was a single, 87-foot rappel into a large underground cavern. The task for us was to find the entrance which proved more difficult than we initially imagined.

On the park map, it showed a trail going to the lair for normal foot traffic. Because the beta online wasn't very clear about how to get to the anchors I had assumed that they would be somewhere near the main trail. With this in mind, we set off into the desert. 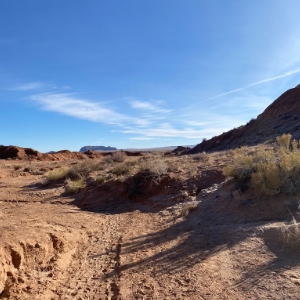 Eventually, the trail deposited us into an old stream bed which we followed for some time. After about 15 minutes in the stream bed, I thought that something was off, we should have been at the entrance by now. Fortunately, I had a map of the area downloaded on my phone using AllTrails and sure enough, we were a considerable distance away from where we were supposed to be. Because of how flat the terrain was we cut across the desert and eventually reconnected with the actual trail.

As we neared the end I realized that we were not where we wanted to be. This was most definitely the exit and there was no feasible way to get to the top from there. As this thought sunk in we wondered what our next move ought to be. We could be satisfied with our adventure and just enjoy the cavern from the bottom, or we could backtrack and find the entrance for the rappel. There was only one correct answer for this dilemma: turn around and continue searching for the entrance. 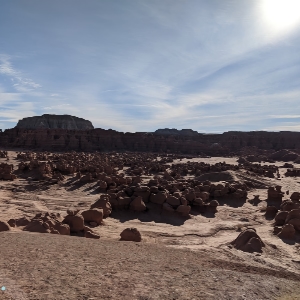 After making it back to the trailhead we went the opposite direction and descended into the Valley of the Goblins. In this part of the park, there are no trails, just acres of hoodoos in all directions. All in the group concurred that this was the closest to Tatooine that we were ever going to get. We had a GPS point of where we thought the anchors would be but no clear way of how to get there. After getting a feel for the general direction we needed to head we started for the second time to seek out the Goblin's Lair.

Several times we were certain that we had almost reached our destination, each time being disappointed by a wall of bizarre sandstone pillars blocking the path. The tall stacks of rock like goblin sentinels watching our every move from above. There was an eerie feeling as we made our way deeper and deeper into the valley.

Eventually, our searching led us to a sign that indicated our proximity to the entrance into the lair. We scrambled down into a small canyon that eventually led to a gaping hole in the ground revealing a large cavern beneath our feet. We had done it! We had found the entrance to the Goblin's Lair! 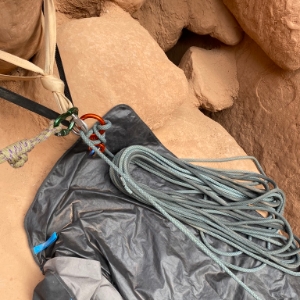 Determining that this was as good a place as any to take a lunch break, we sat down and ate the food we had carried with us. After we had refreshed ourselves I pulled out the rope and began to prepare the anchor. I flaked out what I hoped would be enough rope, walked next to the edge, and shouted "ROPE!" before tossing it into the abyss.

Several seconds passed before we heard a soft "thud" indicating that I had estimated enough rope to get us to the bottom. After finishing the rope setup I connected my belay device and backup prussic and prepared to descend. The first 15-20 feet were against the wall but then everything dropped out and I was free-hanging for the remaining 60 feet.

It was such a good feeling to be coming down a rope again, especially into such a magnificent underground room. I reached the bottom, disconnected, and proceeded to act as the belay while the other three descended into the Goblin's Lair.

Once we were all on the ground I pulled the rope down, which did get caught a few times in the grooves that had been cut from so many others rappelling down previously. After taking off our gear and coiling the rope we scrambled out of the cave and were greeted by the warm sun shining brightly onto our faces. 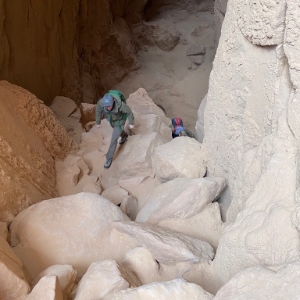 Even with the complications of taking the wrong trail and wandering around the valley trying to find our destination, this trip was an absolute blast. Each one of us had a great time and the challenges only make it more memorable.

At the end here I'd also like to pay tribute to the incredible man whose holiday made this adventure possible, Martin Luther King Jr. While he wasn't an environmentalist, his work opened the doors for so many people to have more opportunities to experience the beauties of the world. The values and rights he fought for are ones that we must continue to preserve and protect. It doesn't matter who you are or what you look like, each person deserves equal opportunities to live life to the fullest.

This, at least in part, means that everyone ought to have equal access to natural spaces. The wilderness around us allows us to find freedom but also forces us to acknowledge our dependencies on the Earth and on each other. King didn't work alone to fight for Civil Rights, he relied on others to help him with that cause. Let us then work together in preserving the world, for ourselves, and for the future.