Santa in a Canoe?! 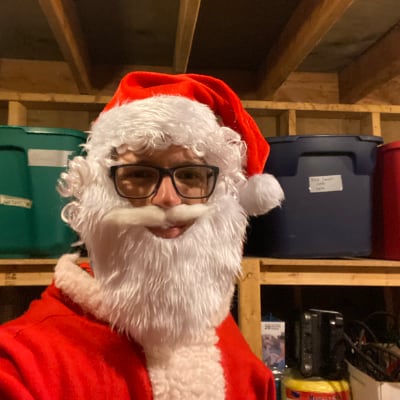 When most people think of Santa they imagine a sleigh being pulled by eight flying reindeer. That's how I imagined him until the beginning of December when I was told to dress up as the big man and hop in a canoe for my job. Yep, you read that right. Santa in a canoe. It wasn't a flying canoe and certainly wasn't pulled by reindeer. In fact, there wasn't anything unusual about the canoe except that it was paddled by Old Saint Nick.

Now, there's nothing particularly exciting about where I was canoeing around, it was just up and down a stretch of the Provo River near where it emptied into Utah Lake. Nothing exciting that is, until we filled it with Christmas lights on all of the trees and across the river. It is quite a sight to behold! And that brings us to why I, as Santa, was paddling around on the Provo River in a canoe. There were boat cruises that we pulled up and down our stretch of the river while our guests sang carols and admired the lights. And then at a certain point in time Santa, either me or one of my coworkers, would paddle over and share his predicament.

To speak as Santa, "I was doing a test-flight with my reindeer to make sure that we were all good for Christmas; specifically to ensure that the reindeer were in top shape for circumnavigating the globe in a night. Things were going very smoothly until we came to this part of the world and saw the lights. There was nothing inherently wrong with the lights, it was just that my reindeer love Christmas lights and got excited whenever they saw them. Unfortunately, they also get a little crazy and you never know quite what to expect.

This time I'm pretty sure that my reindeer were trying to do a loop-de-loop in the sky, which didn't work. I've tried to get it into their heads that loop-de-loops are a bad idea but they never seem to listen. Anyhow, they shot straight up into the air...and I fell straight down out of my sleigh, fortunately landing in this canoe! So have any of you seen my reindeer?"

At this point, I'd glide around the larger boat in my canoe with some peppermints and distribute them to the passengers. Throughout this whole experience, there were usually a few comments that I started expecting, though at least once a week I'd hear something that would catch me off-guard. Frequently people would comment that I wasn't fat enough, to which I'd respond by explaining that I was trying out a new diet. I had decided to lose as much weight as possible to create enough room for all the cookies people left out.

Surprisingly only a handful of people mentioned my beard, though occasionally they would point out that some of my dark hair was slipping out from under my red hat. I would also get complimented on my canoe skills, mainly on my ability to stay standing up in the canoe as I pulled myself around the perimeter of the big boat. I'd usually explain that as Santa I didn't spend all year in the North Pole; I mean, when you only work one month out of the year and have flying reindeer you may as well travel places. My favorite places were warm, tropical areas where I had picked up surfing.

But now to the odd comments. One of the most memorable was when a lady mentioned to her friend that if Santa were single she'd definitely marry him. Then when I came over with the mints she asked if I were single! (assumedly she was asking Santa, which made it a little less weird) I mentioned that I, Santa, was married and that Mrs. Claus didn't know that the reindeer were missing yet and that if I found them quick enough hopefully it would stay that way.

I was also asked several times if I could take people with me. Sometimes there were direct requests to join, but occasionally parents asked if I could take their children with me back to the North Pole! I can only assume that they were joking, but you never know...

I should also mention that I have never gotten so much social attention as when I was dressed up as Santa. Almost every group had someone who'd ask me to join them in a selfie, and I was often blinded by people's flashes going off. That's probably as close as I'll get to experiencing a paparazzi, which is fine by me! I'm not one for seeking attention, so this was more than enough. Moral of the story, if you want people to come and talk to you, Santa's not a bad option.

Though, of course, that's not really why Santa or Christmas is important. Santa comes along as an example of giving and charity, though most people don't recognize that anymore. As Santa, I became a novelty and almost lost my humanity. It's unfortunate but helped me appreciate the importance of just being me. And that's crucial for everyone to remember; in order for people to take you seriously, the best option is to be yourself. In the wild and in civilization this is how trust is developed and goals are accomplished.