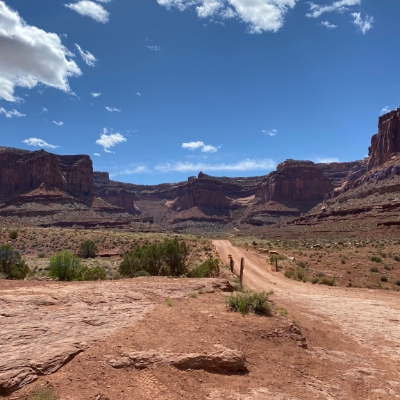 I've often heard that there are two different types of fun. Type one fun is both enjoyable in the moment and in recalling the event. Type two fun is often painful or uncomfortable during the experience but can be enjoyed looking back. Occasionally I also hear about type three fun which is something that isn't pleasant during or after the experience. In other words, it is not fun at all.

Some of the most memorable experiences in my life have been in the category of "type two fun". Recently I was invited to join a multi-day biking trip that will be added to my list of type two adventures. This expedition took me on the White Rim Trail through the Island in the Sky District of Canyonlands National Park.

I had heard stories about it from my Dad growing up but had never had the chance to ride this trail myself. A couple of months ago I learned that one of my aunts had drawn a permit and invited my Dad, brother, and me to join. Another uncle and his kids were also on the trip.

We left for the trailhead on Wednesday morning and arrived around 2 pm. My uncle's truck was our support vehicle and carried all of our gear and supplies along the trail. I really wasn't sure what to expect other than red rock and warm weather. As we unloaded the bikes I learned that we would be riding 30 miles that afternoon. Okay, I thought. That's kind of a lot but it should be mostly flat, right?

Flat is how I'd describe the first mile of the trail. Then we dropped several thousand feet into the canyon for a few more miles. It was fun to ride, but then I realized shoot, in a couple of days I'll have to climb UP something very similar to that. I wasn't too concerned about that because we had four days of mostly flat riding with a few big hills spread out in between...or so I thought. 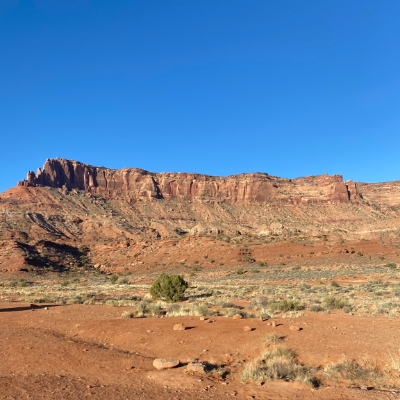 I quickly discovered that flat was not quite the right word for describing the trail. Bumpy and rocky? Yes. Fun to ride? Most of the time. But that first day we climbed a little and then dropped a little. The nerd part of me was fascinated at how the geography changed from gaining elevation when we rode away from the canyon walls to losing elevation as the road curved back towards the towering cliffs.

I felt great for the first 20 miles or so and then my body started reminding me that I wasn't actually in biking shape yet and that it was going to be a very painful last 10 miles. My legs became fatigued and my wrists started aching. Fortunately, the first day had very pleasant weather which greatly helped me stay positive.

I was one of the first few riders to reach the campsite and almost immediately after dismounting I took my shoes off and collapsed on the ground for a few minutes until the truck came with our supplies to set up our kitchen for dinner. We quickly ate the bratwursts and fries we heated up as we decompressed in our camp chairs. If you've ever had a long day hiking or biking you know that very few things feel better than collapsing into a chair after hitting camp. The only thing that might beat that is finally laying down on your sleeping pad to retire for the day, which we did soon after cleaning up dinner. Before going to bed, however, I did take a moment to appreciate how bright the stars were. It is amazing to think how pure that night sky was with only our flashlights providing any artificial light.

I awoke the next day expecting to be so stiff as to make it nearly impossible to get out of my sleeping bag. Miraculously I was able to stand up and walk up with minimal hindrance. We stuffed ourselves on blueberry pancakes, packed everything up, and hopped on our bikes to start on our longest day: 36 miles.

Oh my gosh, this hurts! was my first thought as I tenderly lowered myself onto my bike seat. My tailbone was certainly bruised, and it took 10 or so minutes before I had become accustomed to the pain which would stay with me for the rest of the trip.

The first couple of hours involved a gentle but consistent uphill followed by a similar descent. We pedaled through fields of sagebrush, cacti, and wildflowers all in full bloom. The desert is beautiful. There's no other way to put it. Even through the continuous struggle to keep moving forward I could not refrain from being encapsulated by the unspoiled and untamed beauty. There is something spectacular about a landscape that seems so harsh to life yet harbors countless organisms. Each flower, insect, rodent, and bird has a place in this unique ecosystem. The cryptobiotic soil crusts too play a special role in sustaining life in what many would call a lifeless wilderness. 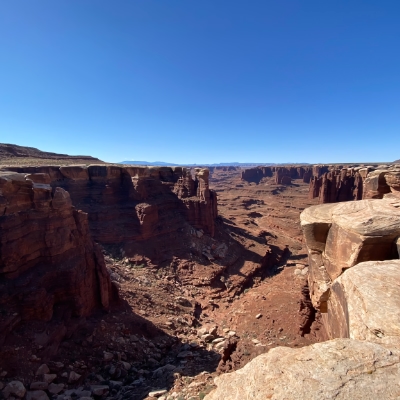 But I digress and will return to where I left off. After several miles of gradual descent, we arrived at the first major obstacle of our journey–Murphy's Hogback. In all reality, this was simply a very steep and rocky climb to the top of a ridge, but after having already biked over 15 miles that day I was starting to feel worn out and was ready for a break. Unfortunately, that break didn't come until after we had all reached the top and stopped to eat lunch.

After lunch, we descended off of the ridge and enjoyed descending several miles of fun trail. By this time the rising temperature was starting to beat down and I slowly felt it draining my energy. We took another extended break to explore a short slot canyon right off the road. We dropped in by hiking down the side of the canyon where the walls weren't very steep. After going down the slot a little way we hit several pools of water that did not look desirable to cross through. Rather than going out the same way we came in, most of us decided to continue up the canyon until we reached the surface. I thought that this was much more exciting and involved some stemming and climbing to get up. 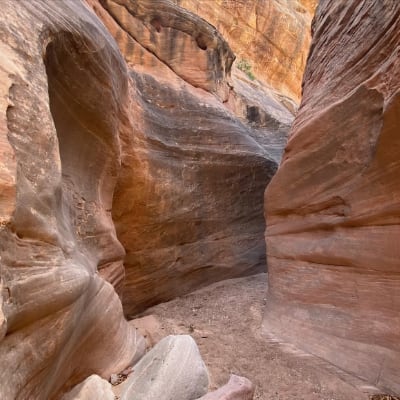 We finally arrived at our camp which was next to the Colorado River. Being very sunburned, sweaty, and dusty we decided to wander down to the river bank and wade in. Conveniently (not) the sun was covered by clouds almost immediately after getting in the cold water. This made soaking in the river much less pleasant, but I still enjoyed feeling relatively clean again. Plus it helped pull some of the heat out of my sunburns.

Tacos were on the menu for dinner followed by griddle-fried chocolate chip cookies. The cookies were an experiment and turned out pretty tasty. Or maybe we were so hungry and tired that just about anything would have tasted amazing.

When I got up in the morning–it's Friday now in case you were wondering–I could immediately tell that it was going to be considerably warmer than the past two days. Fortunately, we only had about 13 miles, but several of those included another burly climb. The climb was pretty early on so we were relatively fresh for tackling it. As we descended after the hill we were introduced to our new nemesis, sand. There had been a few sandy sections sporadically strewn throughout the trail over the past two days, but nothing consistent. Over half of the trail on Friday was comprised of sand deep enough to prevent us from biking through much of it. This was miserable. Sand is not fun to bike in. 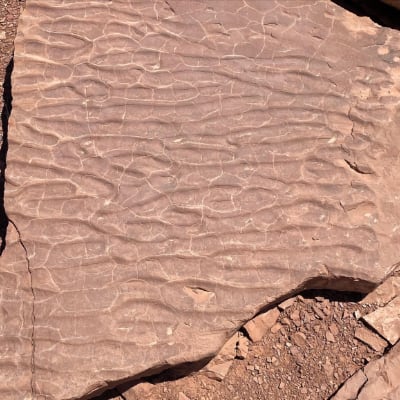 Our campsite for that night was 5 miles down a side canyon which initially we thought nothing about. But as we started biking we quickly realized that most of the trail was uphill through a sandy wash. Because of this, we ended up having to walk a fair portion of it. We finally arrived at camp and noticed that there was virtually nowhere to find shade in the middle of the day. Fortunately, my uncle had a shade tarp on the side of his truck which worked great...until the wind started blowing. The tarp kept getting blown around so to avoid breaking it we rolled it up. Knowing that we wouldn't stay sane sitting in the hot sun we wandered around and luckily found a few boulders down the hill from our camp that provided the shade we were looking for.

Everyone bunkered down for a couple of hours to beat the heat and we even brought our stove and table into our shady alcove to make and eat dinner. As the sun began to set I joined my dad and brother in exploring part of a canyon nearby. There were several places with incredibly well-preserved fossilized ripple marks. I also noticed that one of the sandstone layers looked suspiciously like a mint brownie... 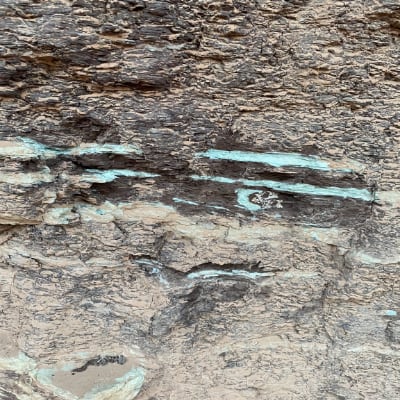 We got up early on Saturday morning and left around 7:30 am for the last leg of our journey. Once we got out of the canyon we camped in we biked on what was probably the flattest and smoothest section of the whole ride. That is, until we arrived at the base of the final climb out of the canyon. Let's just say that this part was about the opposite of flat, but at least the road was well maintained! My legs were dying by the time I reached the top but I did it! I had successfully ridden the White Rim Trail! 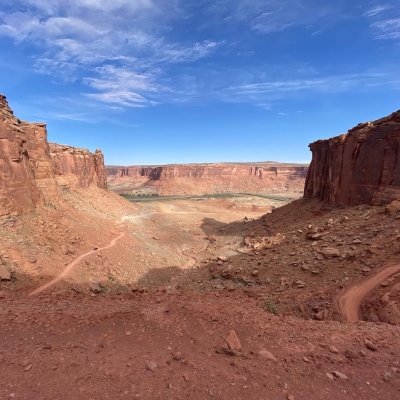 we saw. If I remember correctly we encountered maybe three other groups of cyclists. For the most part, we saw a lot more people driving some form of off-road vehicle. While I appreciate having a truck to carry our food, water, and gear I don't think that I would want to travel this trail in a vehicle. It takes away most of the struggle and the vulnerability from the experience. Yes it was hard and yes it was painful but it was a positive and memorable experience overall.