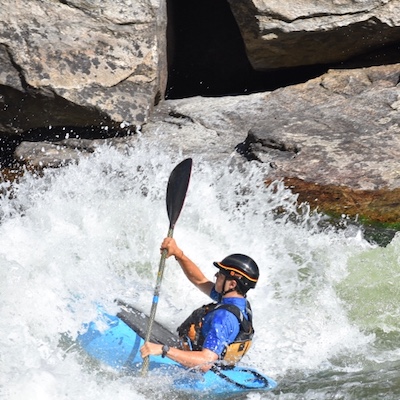 Arguably one of the most intense sports out there, whitewater kayaking allows you the freedom to take your own lines and to really feel the power of the waves. When you are punching through holes and soaring over waves there is a sense of great satisfaction from doing something that most people would never dream of doing.

When I guided on the Salmon River, I often mentioned an experience that the Lewis and Clark expedition had while traveling through the area. The story goes that as they came over a ridge they heard something that terrified them. An intense roaring coming from downriver. They had initially planned on boating because it would be a more direct route to the ocean, but the sounds of the whitewater deterred them and they continued their trek on foot. I loved this story because right afterward I would tell my guests, “the rapid they heard is the one that we are heading straight towards!” Multiple times a week I took clients rafting and kayaking through the very thing that scared off those early explorers, and they loved it.

I mention all this because while there are certainly dangers on the water, kayaking is quite easy to get into. The best way to get started is to find a group to help you out. If there is a boating store near you, that would be a fantastic resource. If not, then there are often online forums where you can connect with other kayakers in your area.

One of the first things you need to do is know how to put on a lifejacket, helmet, and sprayskirt. Lifejackets and helmets are pretty straightforward, just put them on and tighten them up. Sprayskirts you will put on over your clothes and under your lifejacket. This is what you put over the cockpit of your kayak so water doesn’t get into the boat.

When I helped people first start kayaking, I told them to remember three essential principles. First, keep your hips loose. Allow your hips and boat to move with the waves, acting as built-in shock absorbers. Second, always hit waves straight on. If you hit a wave sideways, it is much more likely to tip you. Finally, don’t stop paddling through the rapids. Each paddle stroke acts as a brace to keep you up. The people who remembered these three things were always much more successful as we took them down the river.

There are also certain hazards on the river that can have an extra big impact on kayakers, the first of these being strainers. These are often trees or bushes that come into the river. Just like your kitchen strainer, these will let the water through but not anything else. Rocks are another hazard to watch out for. When they are covered by the water rocks create waves, but when they stick out they can become dangerous obstacles. Rivers also have different hydraulic dangers, the most common being the hole. Holes generally form when water pours over a rock but then comes back in on itself. When you get stuck in a hole (I know this from personal experience) the water will turn you around, sort of like a washing machine. It’s quite the experience, but not something I would recommend. Some holes are strong enough that the will keep recirculating you indefinitely!

Always remember to stay safe and have fun while kayaking! If you want to read more about whitewater, check out my Rafting Basics article.