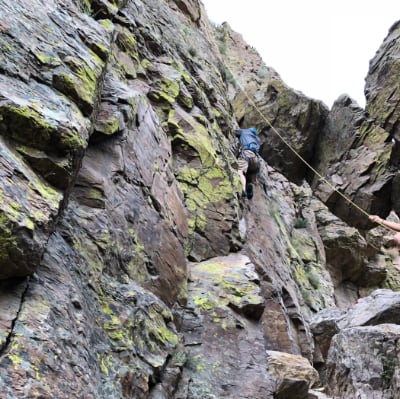 There is something special about the thrill of reaching the top of an intense climb. Being able to look around and think "yeah, I just did that!" brings a satisfaction that is hard to beat. Climbing is one of those activities that looks both incredibly simple yet strikingly complex all at the same time. The concept is very basic: get up, and then ideally back down, some sort of wall. The ways that this goal is accomplished are where climbing really gets interesting.

I'm not going to claim to be an advanced, world-traveling climber, but I do enjoy the activity and have learned a lot as I've spent time researching and experimenting. This article is the culmination of my experiences up to this point and will hopefully give you a good place to start. Always remember to stay safe and stay smart!

In climbing there are 4 main disciplines, all of which involve the use of your arms and legs to get up or across a rock face. These are Top-rope climbing, Sport Climbing, Traditional Climbing, and Bouldering. The first three methods involve the image that most people think of when climbing is discussed: a climber in a harness who is ascending a steep cliff and is attached to a rope with a belayer at the bottom (or above them in certain cases). Bouldering on the other hand does not involve being roped in and uses a spotter and crash pad for protection.  Here's a more detailed breakdown of each mode of climbing.

If you've ever been to a climbing gym, this is most likely the type of climbing that you would have seen. The name "top-rope" is given because the rope is threaded through some sort of anchor at the top of the route. This is what most people start with when they try climbing for the first time. You will be attached to one end of the rope (either with a knot or a carabiner), and the other end of the rope will be attached to a belayer. The belayer will keep you from falling far if you lose your grip(physically or mentally), and will lower you down after you have finished climbing.

More popular and more challenging, sport climbing also has a belayer, but rather than having an anchor for your rope at the top of the route, you will use carabiners to clip your rope into bolted anchors throughout the route up.

Very similar to sport climbing, trad climbing involves creating your own anchors using different devices that are jammed into cracks in the rock face. You put these in as you climb up, and attach your carabiners and rope to these anchor points.
Note on Sport and Trad Climbing: These are both in the category of Lead climbing because you lead the rope up to the top. Before lead climbing it is recommended that you get certified at your local climbing gym. This allows you to practice in a safer, supervised situation.

My personal favorite style of climbing, bouldering originated from people climbing actual boulders, hence the name. Because you will never be more than 8-10 feet off of the ground,  ropes aren't used for bouldering. Instead it is recommended to have a crash pad under you and a spotter near you to cushion your fall. Or rather, the pad is used to cushion your fall and the spotter is there to keep you from falling backwards and slamming your head on the ground. Don't fall on your spotter. they are not supposed to be the cushion!
Bouldering routes are usually referred to as "problems" which generally require more technical moves. There is something special about the flow of sending a bouldering problem that I really love.

Climbing routes and bouldering problems are both rated for difficulty, but use different scales. Climbing routes in America use the Yosemite Decimal System and go from 5.1 all the way up to 5.15c.
Bouldering routes on the other hand use the V scale named after John "Vermin" Shermin, a prominent climber in Texas who created this scale years ago. This system ranges from V0 to V16.
One thing to note about these ratings is that they are somewhat subjective and the requirements for a certain difficulty level aren't set in stone.

Hopefully that gives you a place to start. In the future there will be additional articles explaining climbing jargon and what gear you will need. Stay safe and send on!