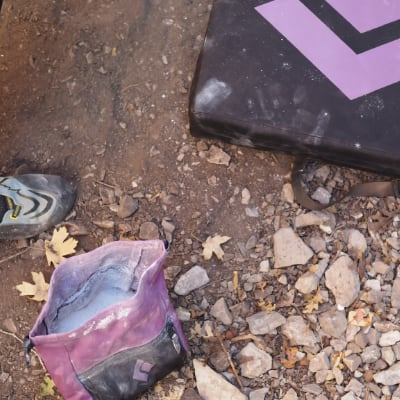 Often when I share my love for climbing with others I get asked a couple of questions. First is usually what gear they need to start which is followed up by asking which items they should prioritize getting first. I usually start by answering the second question and recommend that they buy a harness and a pair of climbing shoes before anything else. Which one of these to get first is really up to personal preference.

I personally got my harness before my shoes because I was working at a climbing wall and spent most of my time belaying. This meant that I would spend several hours every evening in a harness so I wanted something more comfortable than the basic webbing ones we provided our guests. For a good quality harness you'll be looking at spending $50-$70 new. Climbing gear is something that you have to be very careful about buying used because of how much pressure can be put on it. Unless you know how to quality inspect someone's used equipment, I would recommend purchasing new for all of your gear.

Shoes are the second thing that I bought and they made a world of difference in my climbing ability. Climbing shoes can allow you to edge on the smallest points and smear on the flattest walls. Your sensitivity increases and you begin to really feel the rock. If you plan on doing any bouldering, shoes are an absolute necessity. When top-roping, climbing shoes aren't as crucial, especially for easier climbs (for an explanation of the different styles of climbing, check out my Climbing Basics article). However, once you get your first pair of climbing shoes you'll be asking why you didn't get them earlier. Climbing shoes have a wide range of prices, but for beginners I would look for something between $40-$70. One thing that I've found while looking for my own shoes is that they often go on sale. I have consistently been able to find my shoes for 30-40% off on different online gear shops.

When searching for both shoes and harnesses, the number one thing to keep in mind is how it fits. If your gear is too uncomfortable, you won't want to use it. I always recommend that people go to different gear shops to try on as many shoes and harnesses as they can before they make any decision. One thing to note about shoes however, is that while you don't necessarily want them to hurt as soon as you put them on, they should be tight. Having a tight-fitting climbing shoe allows you to have more sensitivity on the rock and to climb better in general.

Shoes and a harness are all you will need if you want to climb in a gym, but what if you want to start climbing outdoors? My first recommendation is to find someone who already has the necessary gear and go with them. This allows you to learn how to climb outdoors and determine if it is something that you enjoy. Climbing on natural rock often requires more effort to get to the cliff and usually doesn't allow you to get as many climbs in. However, I personally love it because it allows me to enjoy the fresh air and is free once you have the right equipment.

If you've decided that you want to start climbing outdoors on your own, the next thing to obtain is a dynamic climbing rope. The most common length to start with is 60 meters (196 feet). Longer routes require more rope, but are also more difficult so I would recommend beginning with 60m. Occasionally I've found ropes on sale for as cheap as $100, but generally you'll be looking at $150-$200.

After a rope you'll need carabiners to set up a top rope anchor. If there are already bolts at the top of the route, clip carabiners (or I use two quickdraws) to the anchor chains and run your rope through those. This prevents excess wear on the anchor so it will last for a longer time. One other critical piece of gear is a belay device. This is what allows someone to prevent you from falling all the way to the ground. An ATC, probably the most basic belay device, will cost between $20-$30. This is what I use and it works well. A GriGri, which has an auto-locking feature, runs between $100-$120. The extra safety feature is helpful, but is not necessary if you take extra care to belay well.

A helmet is another beneficial item to pick up for outdoor climbing. Interestingly, the belayer is often who needs a helmet most because of loose rocks that could fall down on them. Helmets cost between $40 and $100+ depending on how lightweight and fancy it is.

The last thing that I'll mention for getting started with your climbing gear accumulation is a chalk bag. I'm not sure what it is about chalking up before or during a climb, but I'm convinced that chalk gives you some sort of super powers. Technically all it does is dry out your hands so they aren't sweaty and you can grip the rock better, but there is something magical about chalk. A basic chalk bag will cost around $15 with another $5-$15 for chalk to put in the bag. I personally am a fan of what are known a "chalk socks". Essentially it is a cloth bag (kind of like a sock) that is filled with chalk. The one downside is that you aren't able to get as much chalk on your hands as with loose chalk, but you also don't have to worry about it spilling out.

There are many other things that are useful when climbing, but this list contains most of what you'll need to get started. Be safe, and have fun on the wall!