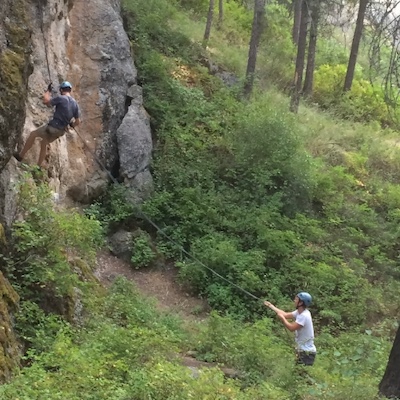 Standing on the edge of a hundred-foot cliff with the intent of walking off backward might not be someone’s first thought of a good time, but for me, this thought excites me! Rappelling, or descending a rope off of an edge, is often one of the most terrifying things for someone to do. I’ve taken people rafting down intense class three and four rapids and they seem fine, but once they get to the edge of a cliff many of them start to tremble and rethink their life choices. Something in us seems to have an instinctual aversion to falling from great heights, which is probably a good thing.

All this being said, I love rappelling! Jumping down a cliff face at great speeds is exhilarating, though definitely something that you should only do after you are comfortable with rappelling slowly first.
Rappelling shares a lot of the same equipment as climbing, though there are a few notable differences. You obviously need a helmet, harness, and rope to make it down. The rope used here is different than a traditional climbing rope because you will want a static rope (one that doesn’t stretch) when rappelling. The other piece of gear that you will need is a rappelling device. There are many different types, but the two most common are a figure eight and an ATC. Each of these creates friction on the rope so you can control the speed of your descent. When rappelling quickly I use gloves to avoid rope burn, but when going at a slower, more controlled pace, gloves aren’t necessary.

When rappelling, it is smart to have some sort of belayer to stop you if you fall. For beginners, having a more experienced person at the top with another rope attached to them is the safest option. A top-belay allows someone else full control of your speed which is very comforting for those who feel nervous about rappelling. The other basic option is what is called a fireman’s belay. For this, a person stands at the bottom of the rappel holding onto the ends of the rope. If the rappeller starts to lose control, the belayer simply has to pull down on the rope and the person will stop.

Rappelling is most often used to descend mountains or travel through canyons, both of which are incredible. This is another sport that you should not try to do on your own until after you have become comfortable setting up anchors and going down cliffs with someone more experienced. When done properly, rappelling in any form can be very safe and lots of fun. However, even a small mistake can bring serious consequences.

So use your head, be safe, and have a blast on your next rappelling adventure!