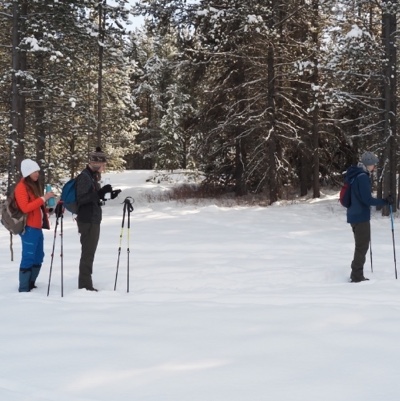 While the exhilarating adrenaline rush of sending it down a steep slope is exciting and breath-taking, I’d like to give a shout-out to the lesser-known brother of downhill (also known as Alpine) skiing: Nordic Skiing.

Nordic Skiing, more commonly known as cross-country skiing, is my personal favorite winter sport, though it often gets bad vibes for being “easier” or “less-cool” than other more popular activities. To those of you who may share similar (albeit incorrect) opinions about Nordic Skiing, I would like to bring to light the true nature of this underrated winter sport.

As the name suggests, this style (the original style) of skiing started in the far north Scandinavian countries (such as Norway), and was one of the primary modes of transportation in those snow-covered lands. There is a lot of history in regards to the evolution of ski design, and when it really started being popular as a sporting event, but I’m not going to go into all that right now. Suffice it to say that this is a very old sport which has seen some amazing advancements over the years.

With that out of the way, let’s get into the actually important details of how cross-country skiing even works, and how it is way better than just going down a hill over and over again. There are two styles of Nordic skiing: Classic and Skate. The Classic style of skiing is what I prefer and has a much lower initial learning curve, so that’s what I’ll focus on for most of this article.

Classic skiing is where most people start as they begin their conversion to cross-country skiing and involves keeping your skis parallel while moving one ski at a time in a “kick and glide” motion. As you move one foot forward, you will press your other foot against the ground to push yourself into motion and you’ll begin to glide. Then you’ll just repeat that but with the opposite feet.
This technique is known as the Diagonal Stride and provides the basic elements for moving across most snowy terrain. The glide portion is what is often the most difficult to master, but is what will allow you to go fast while expending less energy. As I have spent time improving both my kick and my glide, skiing has become more and more enjoyable! The speed I get when employing proper form always brings a grin to my face! Now, you will not be able to go near as fast as when going downhill, but you will also be working against gravity much of the time. Nordic skiing is in general a more energy-intensive sport and if done correctly provides a very healthy winter workout along with a very good time. (see here for 10 of the health benefits of Cross-country Skiing)

The equipment needed for classic skiing includes four main things: the skis, the poles, the boots, and insulation. Because your propulsion comes from pressing something grippy in the middle of your ski into the ground so you can kick off of it, the first thing you need to decide is what sort of “grip” you want. For beginning skiers, I would recommend going for what is commonly known as fish-scales. These are essentially small plastic scales on the bottom of your ski which provides decent grip for moving forward. Fish scales are also the easiest to maintain and are relatively hassle-free. Another option is to go with a newer technology which involves having a strip of mohair on the base of the ski which allows you to kick forward. The third option is what requires the most amount of work, but can allow give you the greatest performance. This involves purchasing a waxable ski that is entirely smooth on the bottom. The grip comes from applying different rub-on waxes which can stick to the snow. The type of wax you use depends on the temperature and conditions of the snow.

Skate skiing employs a very different technique which is similar in form to ice skating. Think of a v-shaped pattern propelling you forward. Longer poles and slightly shorter skis are usually recommended for skate skiing. Your skis will also not have any sort of traction on them (such as scales, skins, or wax) so they will glide better. The boots used for skating are also more rigid and provide greater ankle support.
One of the big reasons why I particularly love cross-country skiing is that you can do it almost anywhere where there is snow! If you want a groomed trail, often golf courses and State and National Parks have both classic and skate tracks groomed for the enjoyment of many skiers. However, the fun doesn’t have to stop there! Cross-country skiers are able to go places in the winter where very few others can go because of motorized vehicle restrictions. Some of my favorite winter memories involve skiing through the snow-clad forests of eastern Idaho on a beautiful sunny day.

So there you have it: the basic rundown of cross-country skiing. It is very simple to get started, almost as easy as walking! But with the simplicity can come great satisfaction as you push yourself to develop better form and greater speed and performance. Whether you are looking for a way to stay fit during the winter months or to escape to the great outdoors in the snowy backcountry, Nordic skiing is an excellent option!