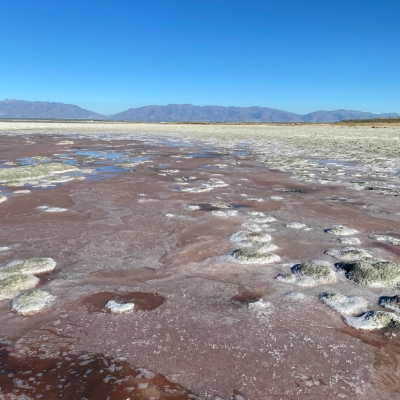 Water is a complicated thing. No matter where you are it seems that there is either too much or too little and rarely just enough. Perhaps this is simply a matter of perspective; if we didn't use as much water maybe there would be enough. Or maybe not.

In the western United States where I live, water is a precious and diminishing commodity. This point has been disturbingly illustrated by the retreating shores of the Great Salt Lake. This lake, similar to Utah Lake which I've done more direct work on, is one of the last remnants of the ancient Lake Bonneville. As the name suggests, Great Salt Lake is very large and very salty. Or at least, it used to be large. The saltiness, however, has increased significantly as the water levels dropped.

Over the past few decades, the water levels of the Great Salt Lake have declined significantly. The past two years have consistently been breaking the low water record each month. A recent report says that if nothing is done the lake as we know it will be gone in five years. When I first heard about this I was shocked. It seemed almost impossible that something so big and important could be desiccated in such a short time. But that's what the data predicts and what I was led to believe.

The solution: bring more water to the lake. The problem: approximately 80% of the water that would flow to the lake is being used by farmers who don't want to be told to stop using their water. The other 20% is primarily municipal and while that is important, it isn't the top priority for saving the lake. Something needs to be done to incentivize those farmers to send more water downstream.

Over the past year, I've been to a few different events regarding the Great Salt Lake. The first was called the "Great Salt Lake Issues Forum" hosted by Friends of Great Salt Lake (FOGSL) in May. It was a scientific research conference where a number of presenters shared their research on the lake and explained exactly how poorly the lake was doing. It was saddening to hear professionals describe the negative ecological effects that were already taking place and how quickly the health of the ecosystem will continue to decline.

The second event in November was a citizen’s forum to encourage discussion about possible solutions for the lake. The breakout session I participated in was a presentation about declining bird and brine fly populations. First off, brine flies are incredibly interesting and I would highly recommend looking them up. Second, these flies are a staple in the diet of many bird species that use the Great Salt Lake as a refuge on the Pacific Migratory Bird Flyway. Many of these birds travel great distances from South America to Canada and the Great Salt Lake is one of the last remaining pit stops on these birds' journeys but soon it may disappear.

This event is where I learned about a rally for the Great Salt Lake at the Utah State Capitol that I attended at the beginning of January. If I'm being completely honest, I wasn't very impressed. This was the third rally I've attended and it was probably my least favorite. It felt unproductive and even counterproductive at some points. It was a perfect example of why legislators don't like environmentalists. Many of the speakers were very aggressive and abrasive towards the state legislature even though the only way to save the lake is to work with lawmakers. It didn't appear that anyone made any effort to involve any member of congress to participate in the rally and nobody presented a clear plan. It felt like the rally just ended up being a bunch of angry environmentalists gathered together to burn bridges with the people who can actually make things happen with the lake.

Perhaps I'm being too judgmental myself. The one good thing I can say about the event is that it was evidence of how many people care about the health of the Great Salt Lake. I would estimate over 1000 people showed up in support of the lake which was inspiring. The content of the rally itself was disappointing, however. And I’ll freely admit that there was a small handful of speakers who effectively addressed the issue and spoke about the importance of collaboration, but sadly this was not the majority.

As an example of a productive methodology, I had the opportunity to interact with Dr. Paul Cox a few times over the past couple of months. Dr. Cox is an ethnobotanist who helped save the Samoan rainforest and is working on developing new drugs for AIDS and HIV. He cares about people and is very effective at getting things done. His secret, he told the group of us who met with him, was working closely with and even befriending lawmakers rather than berating them with slander and anger.

My time working with Conserve Utah Valley is another example of what I would consider effective environmental activism and has taught me the same principle. In order to effectively and efficiently protect the places we love we must build relationships, not break them. The Great Salt Lake needs as many stakeholders as possible to join forces in order to start reversing the damage that has already been done. Angry tirades are not effective letters of invitation to join a cause as important as restoring the Great Salt Lake.