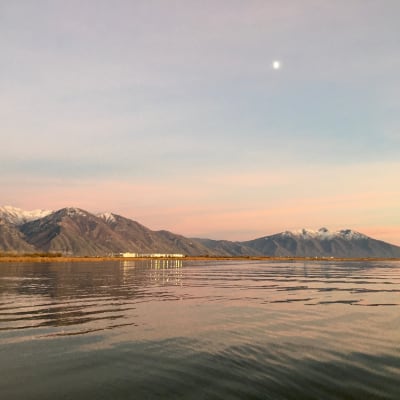 Imagine waking up every morning to the sounds of birds chirping, waves crashing, and an incredible lakefront view. Sounds pretty nice, doesn't it? Most of the time people can only get these things by spending large fortunes and buying a home on the side of a lake. But what if there were an entire city in the middle of that lake that would allow hundreds of thousands of people to enjoy lakeside living. This may seem too good to be true, and that's because it is. However, some would suggest that it is possible and should be the future of Utah Valley.

In 2018, the Utah State Legislature passed a bill called the "Utah Lake Restoration Act" (HB272) which, among other things, removed several protections on Utah Lake and opened it up for private parties to purchase sections of the lake for "restoration" purposes. Around this same time, a business proposed a plan which they called the "Utah Lake Restoration Project". This project suggests that in order to save Utah Lake it is necessary to permanently alter the ecosystem by dredging over one billion cubic yards of sediment from the lake bed and creating artificial islands. This apparently will restore the lake to how it's supposed to be.

I don't know about you, but I personally don't think the words "restore" and "artificial islands" should appear together, but for some reason they do in the proposal. Unless I'm terribly mistaken, there have never been any islands in the middle of Utah Lake, so I'm a little confused at where this concept of restoration comes into play. And it's not just the islands that are lacking in restoration capability, almost every point in the project proposal is missing the mark (check out this link for the background of Utah Lake or this article for a list of reasons why the "Utah Lake Restoration Project" isn't going to help us.).

But let's pretend for a moment that this project didn't destroy the ecosystem of Utah Lake, is it still such a flawed plan? The simple answer, yes. The sediment in Utah lake isn't good for dredging because of its composition. And even if we were to build these islands what if the lake floods? These homes would be destroyed if the islands weren't tall enough. And if there were an earthquake? (which, in case you were wondering, is a real threat in Utah Valley) An earthquake would cause the ground to experience a phenomena called liquefaction. Essentially, this means that the ground becomes part liquid and loses its load-bearing capacity. That's bad. Homes would collapse, and people would die.

And even if the developers were somehow able to create islands in the lake that were tall enough to avoid flooding and sturdy enough to prevent liquefaction there's one looming problem: the metropolis on the lake. The proposal includes plans for over 19,000 acres of islands with over 8000 acres specifically set aside for residences, businesses, and roads. With a combination of low and high-density housing we can expect a full-sized city rising up out of the lake. As poetic as that might sound, imagine looking down from a mountain and just seeing more city on the lake. How disappointing that would be! There's already too much city as it is but Utah Lake is the one relatively undisturbed spot in the valley, let's keep it that way!

Unfortunately, even with all these flaws, the proposal continues to move forward. We must stop this! Legitimate restoration is a noble cause, but this project does not fall into that category. If we really want to protect and conserve Utah Lake, let's stick with methods that actually help, not a large-scale upheaval of the ecosystem. As much as we may want immediate solutions, the best way to help the Lake is through slow and steady effort; in the natural world, things are supposed to take time.

So what can be done? First, educate yourself on the history and ecology of Utah Lake. This could be in the form of doing online research or even just through visiting the lake and building a connection with it. After that, speak up and get involved! There are different local organizations fighting against this project. One such organization, Conserve Utah Valley, has put together a petition to sign for repealing the 2018 Utah Lake Restoration act in order to bring back the protections needed to preserve Utah Lake (the petition can be found here).
What Utah Lake needs right now are people who understand and care about it. You can be one of those people and help make a difference now and for the future.